Apart from Apple Computer, very many Mac news resources exist on the web. Review this short list of the top sites for your daily Mac technology and information frameworks for your workflows and pipelines.

On the Microsoft Windows OS, iSCSI has reached a very mature level. On Linux, the Linux-iSCSI project has a refined iSCSI initiator. On the Mac, there are only a few vendors, and most are on their first generation iSCSI protocol drivers for Mac OS X Panther 10.3 and Mac OS X Tiger 10.4 OS. This is all going to change in the next several months.

Apple Computer has a SAN solution, compatible with ADIC’s StorNext File System called xSAN, a new disk paradigm that supports Mac OS X application only. In order to use the xSAN file system, one needs to erase completely and reformat any attached drives, including RAID subsystems.

Currently xSAN is supported through fibre channel networks only, and requires a dedicated ethernet port for metadata. iSCSI allows a traditional gigabit ethernet (GbE) network to become dedicated to storage with a moderate performance decrease. One can install a dedicated single or multiple port PCI card for dedicated GbE storage networking and internet traffic.

ATTO Technologies offers the Xtend SAN and Studio Network Solutions offers the GlobalSAN product. In the near future, expect D-Link to have products ready for market that go beyond the 1 GbE connection, stretching the storage platform to 10 GbE, beyond the range of 4 Gb fibre channel.

Using computers and information technology (IT) in general comes at a great price. It may consume electricity, human power, or intellectual curiosity. To become good at using something, usually takes many repeat failures and certainly many hours of study and operation.

In the IT space, just two major companies control the worldwide computer desktop: Microsoft with it’s Windows operating system, and second runner up Apple Computer with Mac OS X. Sure, niche players like Sun Microsystems Solaris, Red Hat Linux, or SUSE Linux are available, but are not being distributed on millions of desktops every fiscal quarter. So far there have been at least six releases of Windows counting all the way back from Windows NT, Windows 95, Windows 98, Windows ME, Windows 2000, and Windows XP. Microsoft recently announced Windows Vista, to be released sometime in early 2007. All of these operating systems has evolved from the earlier release, and as the adoption rate increased worldwide, so did the various problems.

With added services also came added security. There is not a single instance of a Mac OS X virus released in the wild to take down Mac machines. On the Windows platform, it’s a regular spectator sport to see how many machine go down on a weekly basis due to spyware, malware, and computer viruses.

Operating system viruses and spyware cripple machines on the Windows side consistently. Antivirus and antispyware tools are not just available, but essential subscription based software to get the machines up and running on a daily basis. In a hypothetical scenario (actual hardware prices are today very competitively priced when performance is compared, i.e., oranges to oranges), if a company saves 10% to 20% on the initial purchase of commodity x86 hardware (or AMD), capable of running Microsoft Windows software, and in the course of the machines life gets hit not by one virus, but by multiple viruses, how much money was actually saved? It may be that the liabilities associated with the commodity hardware and a ubiquitous operating system like Windows actually cost 50% more than a Apple Power Mac G5 or iMac G5 networked system, when the cost of virus software, added security programs, salaries of MCSE technicians and engineers, and the regular system corruptions due to hackers and virus authors are taken into account.

There’s been a dream of mine to have multiple cheap machines networked in a way to form a hive mind, so commands on one distribute to all and work together. This is loosely called grid computing. Imagine 3 iMac G5’s, Power Mac G5’s, or PowerBook G4’s networked together to work as one. The future is now!

At NAB 2005, Apple announced Final Cut Studio, which allows distributed Compressor rendering/encoding, so through a dedicated gigabit ethernet or firewire infrastructure, you combine a few machines into a working super computer. Mac OS X Tiger has as it’s base a technology called Xgrid, which is a protocol for clustering machines together out of the box.

The secret to success is the gigabit ethernet connection running at 1 Gbps or 128 MB/s. so now in the new computing model, the CPU comes second to the network connection. In a few years 10 gigabit will be standard, passing 2 Gbps or 4 Gbps fibre channel.

So now that you can grid the machine together, how about storage? Apple has an Xsan solution. Xsan costs just below $1500 a workstation to get the computers to share storage ($999 Xsan seat license, $499 fibre channel PCI-X card). A much more elegant and economical solution, that works on panther 10.3.5 and above is iSCSI.

you remember SCSI? all macs had it before ATA. Storage engineers never gave up on SCSI, and are reintroducing the SCSI protocols, but over gigabit ethernet! On a more modern mac, you already have the port, or can easily get a $20 network PCI card (recommended approach to separate the storage network from the IP network). The beauty of iSCSI it can be entirely software based, so yes you get a performance hit, but imagine sharing all your hard drive on a small gigabit network using software SAN. This is revolutionary. Current vendors that support the Mac are ATTO technology and Studio Network Solutions. These companies are just the beginning to a wonderful marriage of storage, grid computing, and the Mac. 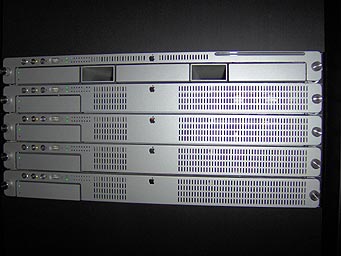 Cloak Media uses a broad set of tools. Here are but a few of the varied applications used on a regular basis:

Apple has historically used Siggraph to announce cool things. This year, on the opening day of the Siggraph trade show, Apple Computer announced its might mouse pointing device. This first ever Apple released multibutton mouse looks like the ordinary elongated apple single clicking device, but has a very small trackball and multiple clicking surfaces.

Also at the booth, Apple featured a fully functional studio workstation setup with full Xsan support and shared rendering and storage resources via Xserve RAID. The majority of Apple representatives work out of the Pro Applications Santa Monica Campus, and for all three days showed nothing but respect and loyalty towards their varied customers.