In a very large North American launch, Panasonic premiered the AG-HVX200 to the public via full page ads in newspapers including the Los Angeles Times, New York Times, and the Wall Street Journal. At the DV Expo in Los Angeles, Panasonic contracted with filmmakers to take the VariCam sibling HVX200 through it’s paces, with footage of a college basketball game, Hollywood street scene, a frame rate exploration of a backlit martial artist, and a green screen music video.

Barry Green’s footage looked fantastic. He shot multiple frame rates at 720p and also some 1080p capture. The Panasonic booth had a 17 inch LCD display as the presentation monitor, and the footage was 80% of the VariCam. Michael Caporale showed an experimental music video shot on a green screen. The original pre-composited material looked sharp, excellent contrast, and ready for green screen removal. Caporale also shot run and gun footage of a Hollywood movie premiere, which looked bright, color accurate, and competent.

Panasonic promised sometime in the future these shots should be available on a DVD. I hope that similar to the VCR-FireWire-NLE launch some two years ago, an editing software vendor release raw DVCPRO HD from the camera, so anyone can test their NLE of choice with actual image captures.

Panasonic also announced the availability of the AG-HVX200 targeted for 29 December 2005. DV Expo featured a near 2 hour walkthrough by Jan Crittenden Livingston, the product manager for the AG-HVX200, on the design and features of this revolutionary camcorder. Included here are keypoint slides from the presentation. 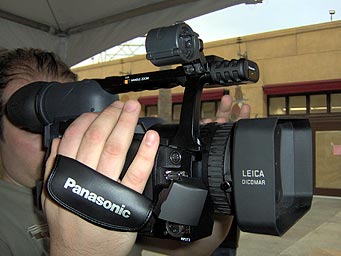 At NAB 2005, producers and directors of photographers wondered what would become of the video cassette recorder (VCR), as solid state flash memory devices usurp the legacy tape based formats like DigiBetacam, DV, HDV, and DVCPRO 50. Sony has chosen a proprietary XDCAM format, based on a magneto optical disk, while Panasonic is going to a SD format PCMCIA card called P2.

As a VCR replacement one would have to consider these factors:

Today, the only viable VCR replacment on a small four hour project is the LTO series, AIT 3/AIT 4/SAIT, and the DSLT 600. In the IT industry, data centers have gravitated towards the multivendor LTO. Quantum is the sole provider of DSLT. Sony maintains a strong following for the AIT and SAIT series.