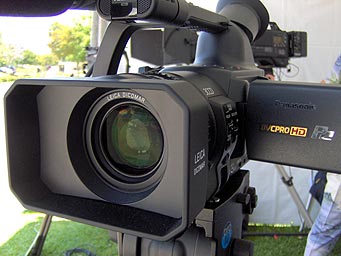 Fortunately, Panasonic did not wait until CES 2006 to announce the new products, but instead had a very large presence at NAB 2005 for the professional DVCPRO HD AG-HVX200 rollout, and IFA 2005 for the consumer MPEG-2 based camcorder rollout. Both products are expected in the fall of 2005.

Unlike traditional portable video capture devices, these new camcorders have no need for magnetic tape. Video tape has it litany of problems including jams, dropouts, snags, tape breaks, curl, and video tracking along with environmental issues like susceptibility to humidity, magnetic field erasure, and simple aging. The era of the cassette is over, and the opportunity to be creative faster and more robustly has arrived.

The first generation product, with a 2 GB to 16 GB starting storage capacity, will need a new workflow. The recording medium, a reusable SD memory device, once filled, needs to be put somewhere, and a storage area network (SAN) or RAID device would be ideal to protect the invaluable electronic image capture. As the era of solid state recording dawns, notably other backup devices are either already mature or nearly ready to archive the DV, DVCPRO HD or MPEG-2 recording.

Today, DVD+R makes an entry level archive medium, with a 4.38 GB (17.5 minutes in DV format, 11 minutes DVCPPRO HD 720p/24) storage platform. DVD+R is cheap, reliable, and long lived. On the horizon, look to Blu-Ray Disc with a capacity of about 25 GB, five times the capacity of DVD+R. Also on the cusp is holographic storage at some 300 GB a cartridge.